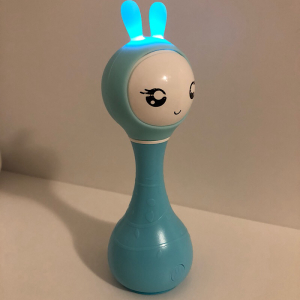 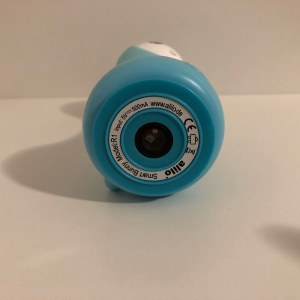 rattles, songs, stories and soothing sound all in one hand grip smart bunny. Sounds great! This is very UP TO DATE toy I will say. This interactive cuddly bunny toy and digital media player invented by Alilo. Bought it from Amazon.de in german version. My son had it since he was 1year old and now he is 2+years and still loves it. This toy has a lot of songs which you can change by press the button longer. When you press the button one time it can change to story, press one more time it can change to soothing sound or classic music, press more it will change to animal or rattle sounds. The material is from non toxic plastic and very strong (since it already has fallen few times) covered by silicon, it will be safe enough for babies to chew on. And I almost forgot, it has lights on its ears too. The tail can be used to turn the bunny ON or OFF and to control the volume. It is recharged via USB. Under the surface there is a lens made from glass that can detect color (for example from paper or the cards that are included). It is a little bit pricey but with all the functions I do not mind.

Recommended to be used under adult supervision.